Election Poll: The Battle for the Change Vote

For interviews, or to find out about our services, please contact Bruce Anderson at banderson@abacusdata.ca (613-882-0929) or CEO David Coletto at david@abacusdata.ca  (613-232-2806)
(This letter is Authorized by Abacus Data)

Three out of four voters want change: but what does that mean?

We asked the 76% of voters who said they preferred to see a change in government, whether they preferred ambitious or moderate change, and change that would be felt soon, or more gradually.  We also asked which of the Liberals and New Democrats looked best positioned to deliver the change they were looking for.

•    Most (58%) favour change that would be felt soon, rather than more gradually (42%).  This is the consensus in all three of the largest seat provinces.  Among NDP-Liberal swing voters, 65% want change sooner rather than later. 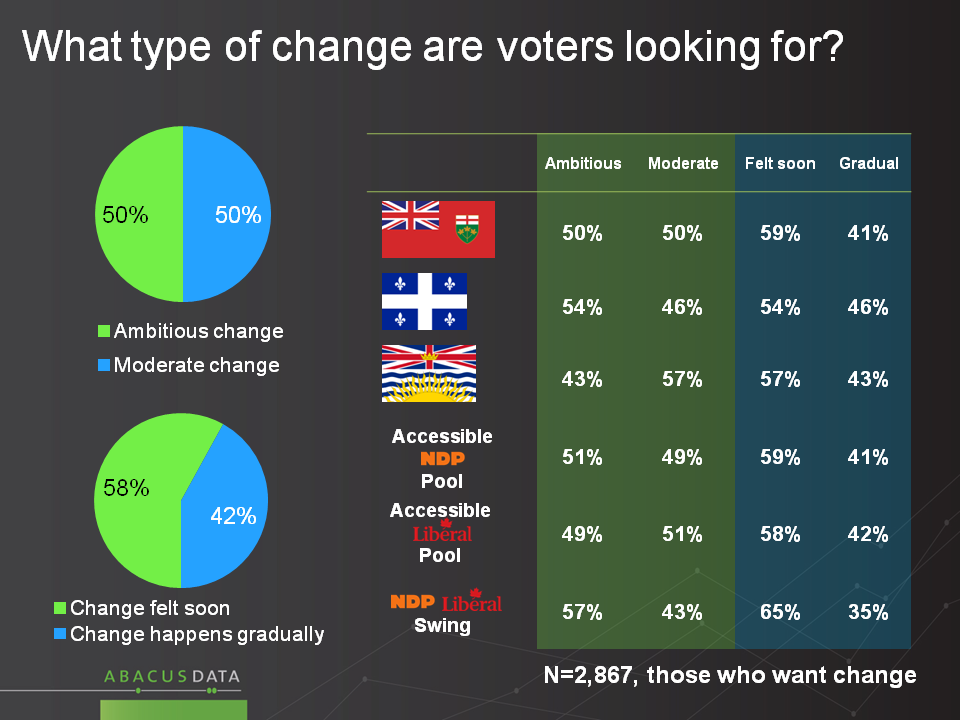 •    Justin Trudeau is seen as the leader who represents ambitious change (63%) and change that will be felt soon (60%). Thomas Mulcair is more identified with moderate change (60%) that will happen more gradually (59%). This puts the NDP leader at a disadvantage to Mr. Trudeau among the Liberal-NDP swing voter. 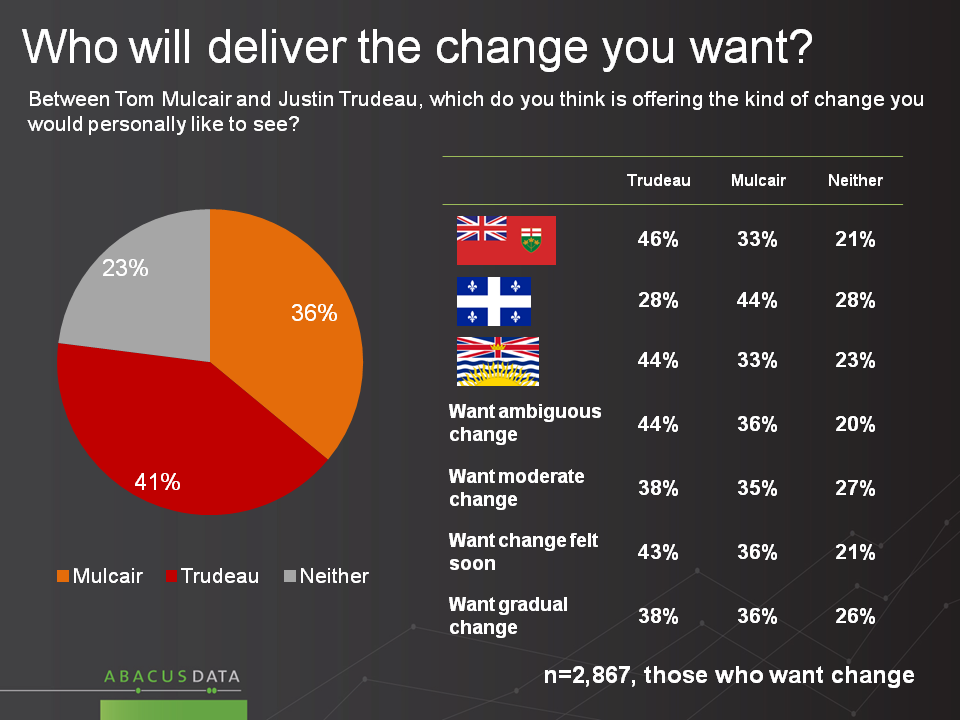 We also revisited questions we asked earlier in the year about what would happen if an NDP or Liberal government replaced the Conservatives.  The results (among the entire sample) reveal:

•    These perceptions show deterioration for the NDP and improvement for the Liberals since July. The Liberals have improved 9 to 11 points in perceptions that they would improve the rate of economic growth, job creation and keep taxes low, when compared to the Conservative government.  The NDP have lost ground on keeping taxes low and keeping Canada safe from terrorism.

It may well be that the rest of the campaign turns on two themes: a Conservative effort to promote concern about the consequences of change and an effort by the two main opposition parties to harden the desire for change and define the most appealing version of change.

Thus far in this campaign Liberals have out-positioned the NDP among change voters.  For those who want ambitious change and to feel it soon, the Liberals have established stronger credentials: remarkable given the traditional relationship between these two parties.  At the same time, among those who prefer more modest and gradual change, the Liberals are competitive with the NDP.  As the leaders battle for the roughly 30% of voters who say they will only vote NDP or Liberal, this may be the topic to watch as Election Day draws nearer.

Our survey was conducted online with 3,814 Canadians aged 18 and over from 9:30 pm ET on September 24 to 3:00pm ET on September 27, 2015. A random sample of panelists was invited to complete the survey from a large representative panel of over 500,000 Canadians, recruited and managed by Research Now, one of the world’s leading provider of online research samples.

The Marketing Research and Intelligence Association policy limits statements about margins of sampling error for most online surveys.   The margin of error for a comparable probability-based random sample of the same size is +/- 1.6%, 19 times out of 20.  The data were weighted according to census data to ensure that the sample matched Canada's population according to age, gender, educational attainment, and region. Totals may not add up to 100 due to rounding.

We offer global research capacity with a strong focus on customer service, attention to detail and value added insight.  Our team combines the experience of our Chairman Bruce Anderson, one of Canada’s leading research executives for two decades, with the energy, creativity and research expertise of CEO David Coletto, PhD. For more information, visit our website at http://www.abacusdata.ca/