Consultations on the City of Ottawa’s 2017 Budget are upon us, and this year, the city and others are trying some new tools for engagement.

There are two stages to the consultations. In October, you can learn more about the budget and hear what other citizens are saying. Then, after the draft 2017 budget is released on November 9th, you can have your say at budget review meetings for Standing Committees, Boards and Commissions.. The final vote at City Council will be December 14.

In the learning phase in October, you can: 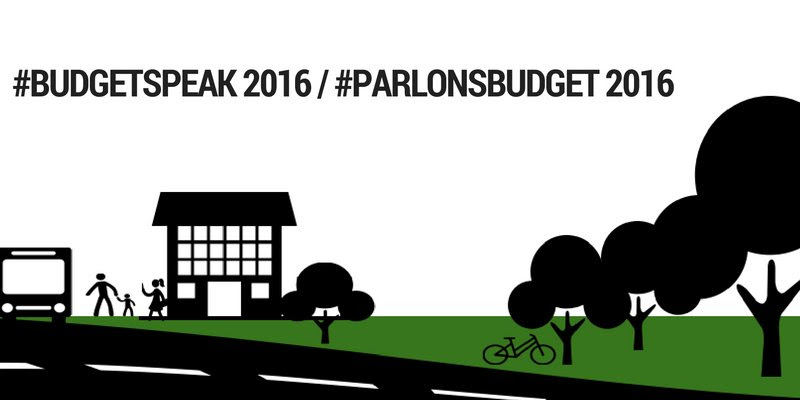 After November 9th, you can:

I tried the online tool and attended the 2017 Budget Townhall for Alta Vista, Hunt Club and Riverview wards.

The online tool is neat. You can cut spending in one area and increase in others, and then get an estimate of the impact on your tax bill. To be honest, though, it’s not the answer to my dreams because there is no dialogue on ways to cut costs without reducing the quality of service. As one colleague said, the tool “makes people just think inside the box.”

I decided to increase spending on transit because the fees are getting so high that they discourage people from taking the bus. Tax dollars are needed to reduce fees so that citizens are encouraged to make choices that reduce congestion and greenhouse gas emissions. That is out of the box thinking.

The dilemma of short-term vs long-term impacts came up frequently at the Councillors Town Hall in the southern wards. Participants wanted to see multi-year budget data by major categories of spending and they frequently asked whether the quality of public services is adversely affected by budget cuts.

The interventions were thoughtful and polite, and added up to vivid evidence of the spending pressures on Council: from upgrading the Hunt Club community centre, the recent cuts in child care subsidies, safe streets (i.e. more policing), better traffic controls at the entrance to Perley-Rideau, inadequate social services, and so on.

To give credit to the City, it has been opening up the budget process. Still, these three wards with combined population of 144,000 could only generate 30 people at a Town Hall. The City’s comment sheet asked for advice on “how the City can improve its process to engage more citizens and acquire constructive suggestions about the budget.”

The short answer is that people want more transparent budget statements and more open dialogue on the big trade offs required. Let’s see whether turnout will be higher when five of the urban wards meet on October 13th.

In the fall of 2013, Citizens Academy offered a first Civics Boot Camp in English over the course of five weeks. The first three sessions were devoted to municipal governance, budgeting and land use planning. The... More

In the fall of 2013, Citizens Academy offered a first Civics Boot Camp in English over the course of five weeks. The first three sessions were devoted to municipal governance, budgeting and land use planning. The... More